Support Alexa's Dynamic Routing behavior by creating internal tools to enable scientists and engineers to iterate faster on their work.

Oversaw operation of CSH's (Computer Science House) Introductory Evaluations process. Introduced students to the organization, and assisted them through their completion of the process's requirements. Served as a directional voice on the Executive Board for CSH as effectively the vice president. Resolved various conflicts relating to behavioral or organizational concerns between members in order to foster a collaborative and inclusive community.

Actively involved in a Special Interest Housing community at RIT called Computer Science House, which specializes in collaborating around and developing skills which are crucial to becoming a strong individual and a valued team member. Contribute to weekly technical seminars and social meetings, constantly immersed in all fields of computer science and engineering.

Bring together students around a passion for learning and using AI by fostering connections and encouraging project collaboration. Prepare weekly presentations and discussions on topics such as regression, neural networks, and natural language processing.

Managed well being and performance of 20 Orientation Leaders who each led their own groups of new students for RIT's New Student Orientation. Organized and assisted with various events and activities throughout Orientation. An incredible test of perserverance and time management due to long days of nearly endless social interaction and management.

Develop weekly study sessions for students in Python and Java based courses to provide a more practical approach to course content. Collaborate with students in class and support their efforts in problem solving and team dynamics.

[WIP] An Alexa skill that increases your productivity by answering : What should I do with my free time? Cosmo listens to your Goals, Interests, and Reminders, and prioritizes them so you have enough time in each day for all of them. Check out more on the Github.

An independent study with Dr.Homan of the CS Department at RIT to determine which real world events are the most reliable factors for predictive models to use. We analyse models for their overall performance, and dates when they perform the best and worst. With these insights, and a thorough understanding of how the models work, we can determine what features are the best predictive measurements. This would ideally culminate in a new ensemble model, or at the very least advise the public which models are most reliable. These insights would ideally support political, healthcare, and general lifestyle decisions.

A personal investigation into the effect that collegiate prestige has on monetary success afterwards. This project analyzes salary data from Payscale associated with major, school, and school type. It is ongoing and has already determined, unsurprisingly, that Ivy League graduates seem to perform significantly better than graduates from other types of schools. Research currently going into classifying 'prestigious' schools, and determining what margin of those schools are in the top earning groups.

An LED board turned personal assistant with the aid of a Raspberry Pi, Arduino, and Alexa. Currently automatically updates the date, and there are plans to integrate Alexa to allow for display of weather and daily reminders. The arduino serves as the main driver for the board, while the pi maintains functionality for getting any data necessary before rewriting the sketch on the Arduino and reuploading.

Solutions to Andrew Ng's Machine Learning Coursera course. The GitHub repo explains this more in depth, but essentially these are all implementations of core machine learning concepts such as linear regression, logistic regression, neural networks, backpropagation, etc. There you will find my explanations of these concepts.

Project at MITRE, a Microsoft Bot Framework bot implemented in Microsoft Teams which utilizes Microsoft Graph to intelligently pair employees with project managers based off of shared interests and other criteria. A project lead starts a conversation with the bot, describes in natural language what skills they are looking for, availability, etc. The bot reaches out to potential employees with this proposal, then gets back to the project lead with those who would like the position.

Check it out at hapi-0.appspot.com!
Partner hackathon project made at RIT's Brickhack. Simple flask app that reads in a handle or hashtag, uses the Twitter API and Tweepy library to pull tweets from that source, then engages Google Cloud Platform's Sentiment Analysis API to derive a sentiment score on each of those tweets. We serve this information back to the user in an aggregated fashion by displaying statistics such as their average sentiment, most positive tweet, number of negative tweets, and more.

Never before worked with R, or done the Advent of Code event, so taking this opportunity to become familiar with both. See GitHub for updates on what I've learned about R as each day goes along.

Group hackathon project made at Hack Dartmouth. Alexa skill which prompts the user for a rap, then creates a response utilizing parts of the user's utterance. The response is formulated using nltk and a pickled version of a naive bayes classifier, which tags parts of speech. This tagger parses the user's input for words to use in the response. Then, a context free grammar structures the response and Lambda serves the response back to the end user.

Displayed at RIT's Presidents' Alumni Ball as part of the Computer Science House Smart Dorm Room exhibit. It is a 32x32 LED matrix which is held onto the top of a desk lamp stand by a 3D printed mount. An Arduino Mega drives the display, which displays one of four designs. A bluetooth module accepts serial communication to toggle between the various displays and their respective speeds / colors. All designs custom made.

Part of the elevator lobby entertainment system on Computer Science House. Integrated with another house service, HAROLD, such that anytime a member scans their iButton, this light display turns into a rainbow party. The display is a 150 LED strip of individually addressable LED's, which are driven by an arduino. A raspi is hooked up to the arduino for remote update abilities.

Project at MITRE, a helpdesk assistant which streamlined employee requests and questions. Accessible by phone or web, employee engages in conversation driven by Watson Assistant, where they are appropriately redirected to the correct department. Frees up time of helpdesk agents and gets employees to solutions faster.

Discuss mathematical foundations of machine learning and their various applications. Implement the various concepts in Python and / or Matlab. Subjects studied were : linear and logistic regression, neural networks, superivsed and unsupervised learning, gradient descent, among others. 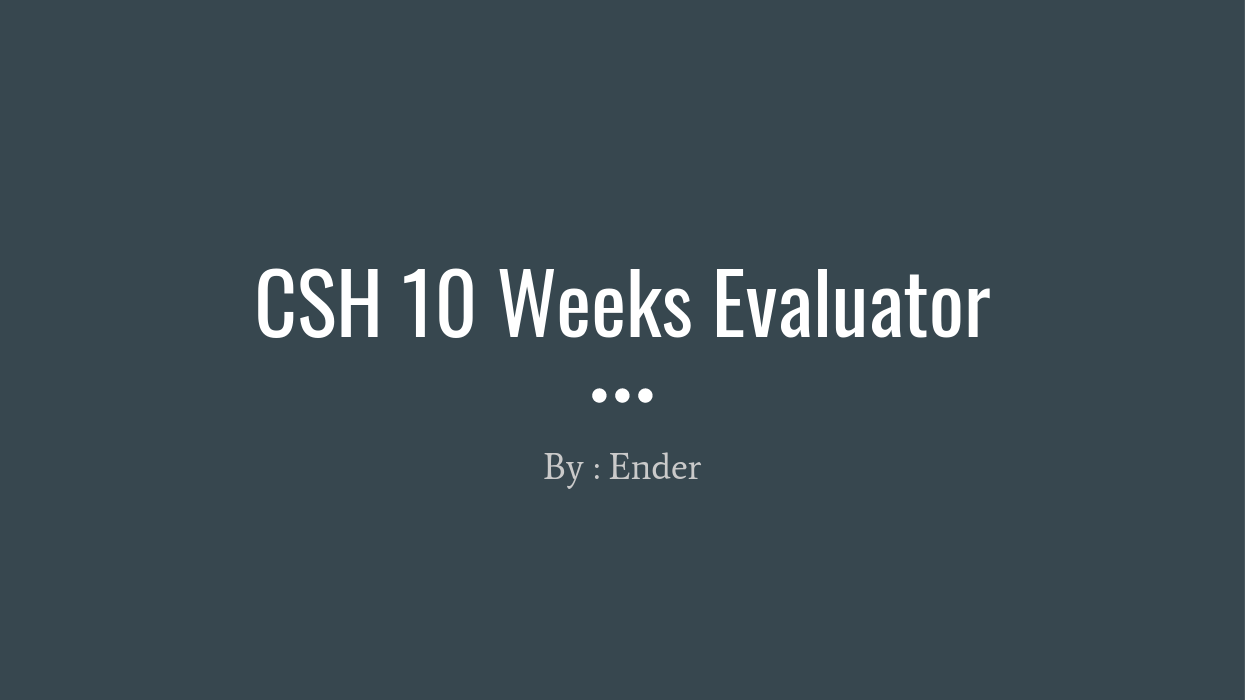 Discussion of project which automates the CSH Intro Process using logistic regression. Given to CSH. 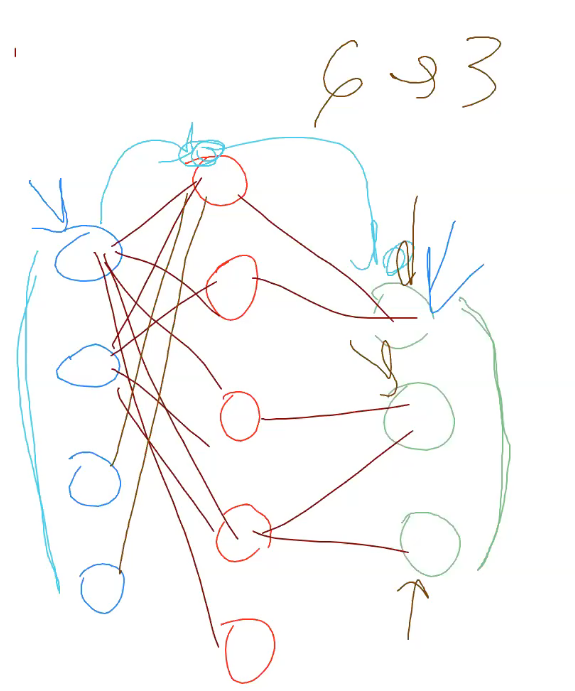 Intro to Neural Networks in Tensorflow

Discussion of Neural Network concepts and live implementation in Tensorflow. Given to CSH. 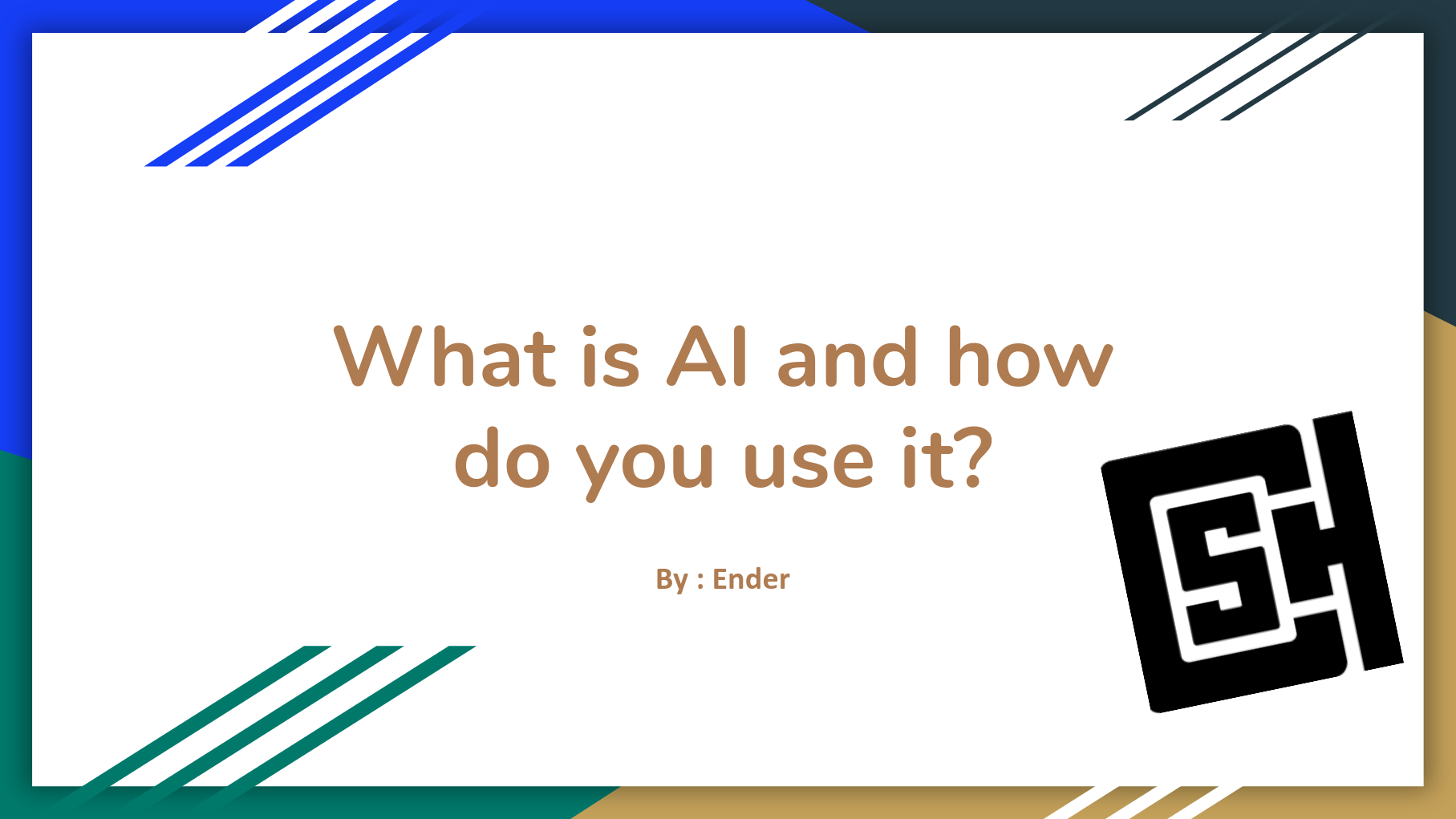 What is AI and how to use it

Presentation on common AI algorithms, process for choosing a model, and tools to implement them. Given to CSH. 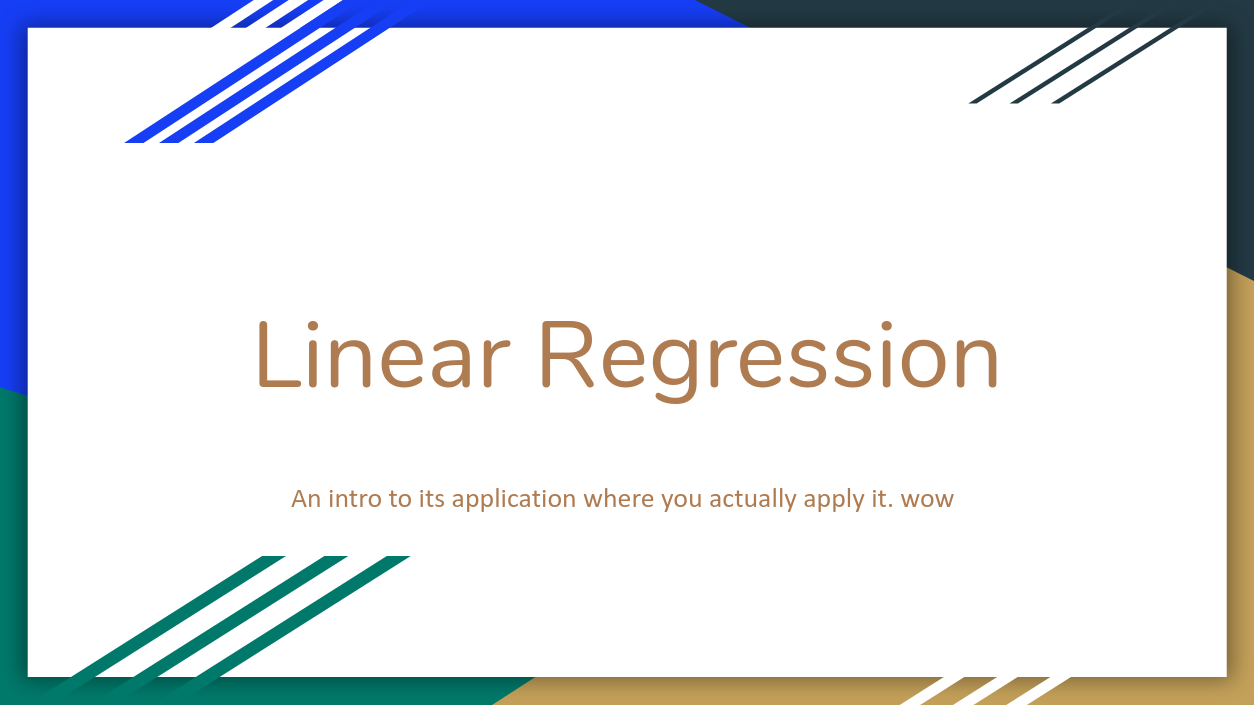 Interactive workshop covering an implentation of linear regression using python and numpy. Given to CSH. 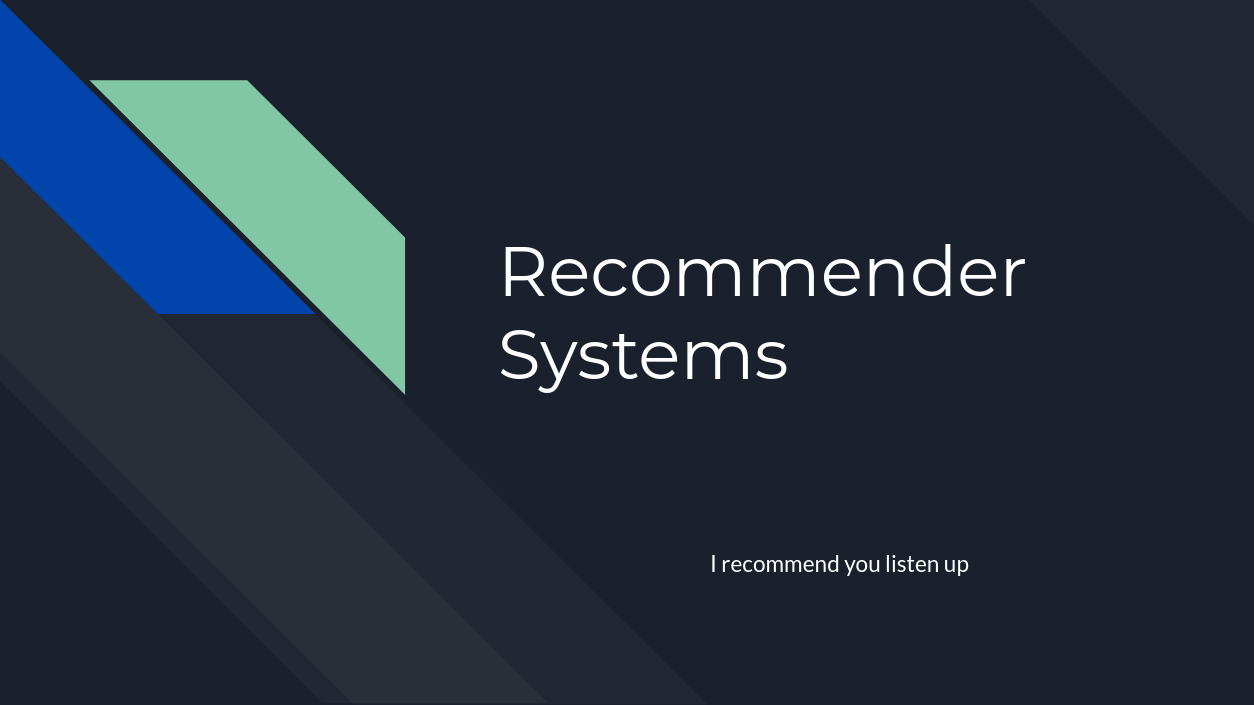 Discussion on collaborative and content based filtering and their real life applications. Given to RIT AI Club. 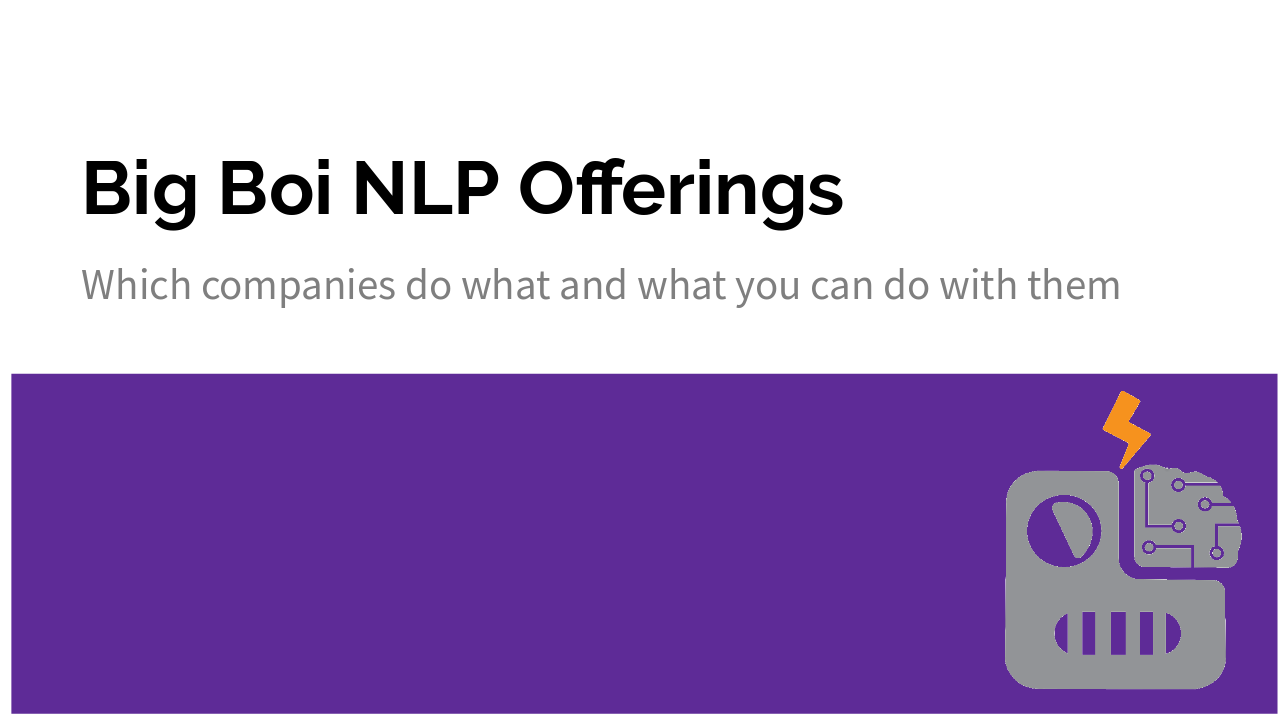 Pros and cons of NLP API's from IBM, Microsoft, Amazon, and Google. Focus on one use case implementation. Given to RIT AI Club. 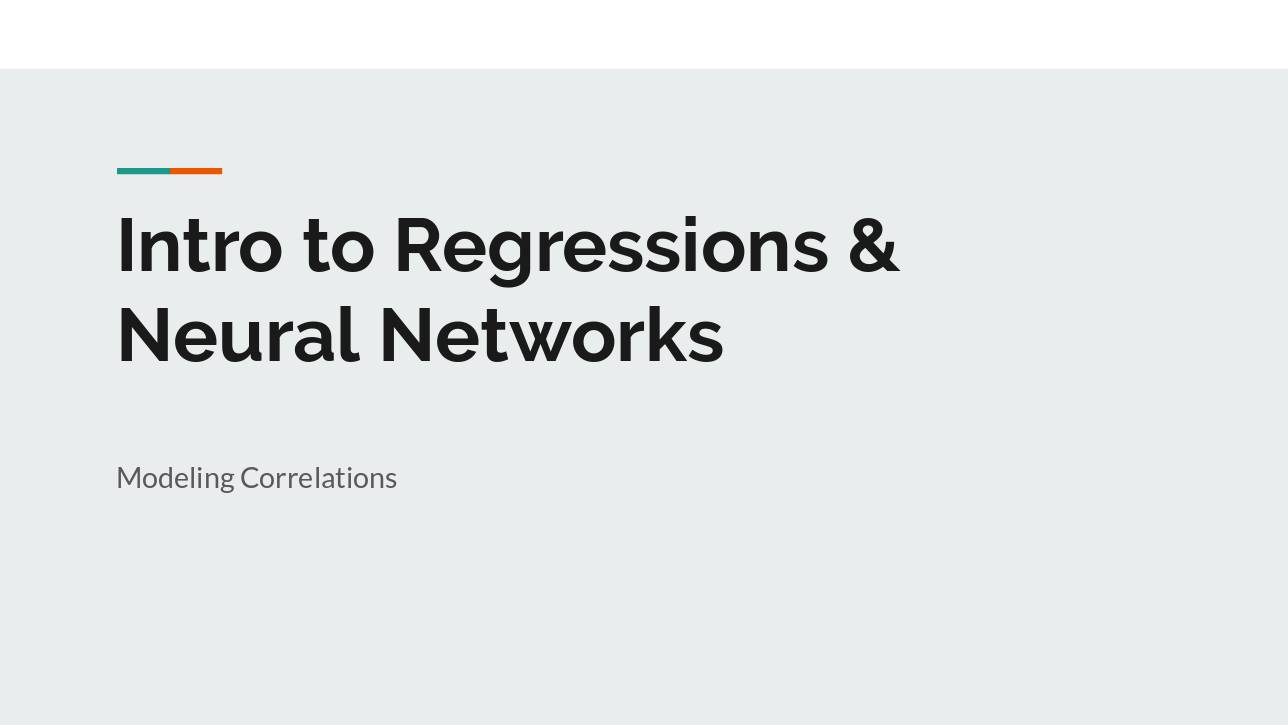 Intro to Regressions and Neural Networks

Mathematical and intuitive discussion of these topics. Approached from both high and low level, given to RIT AI Club with Vice President, Perry Deng. 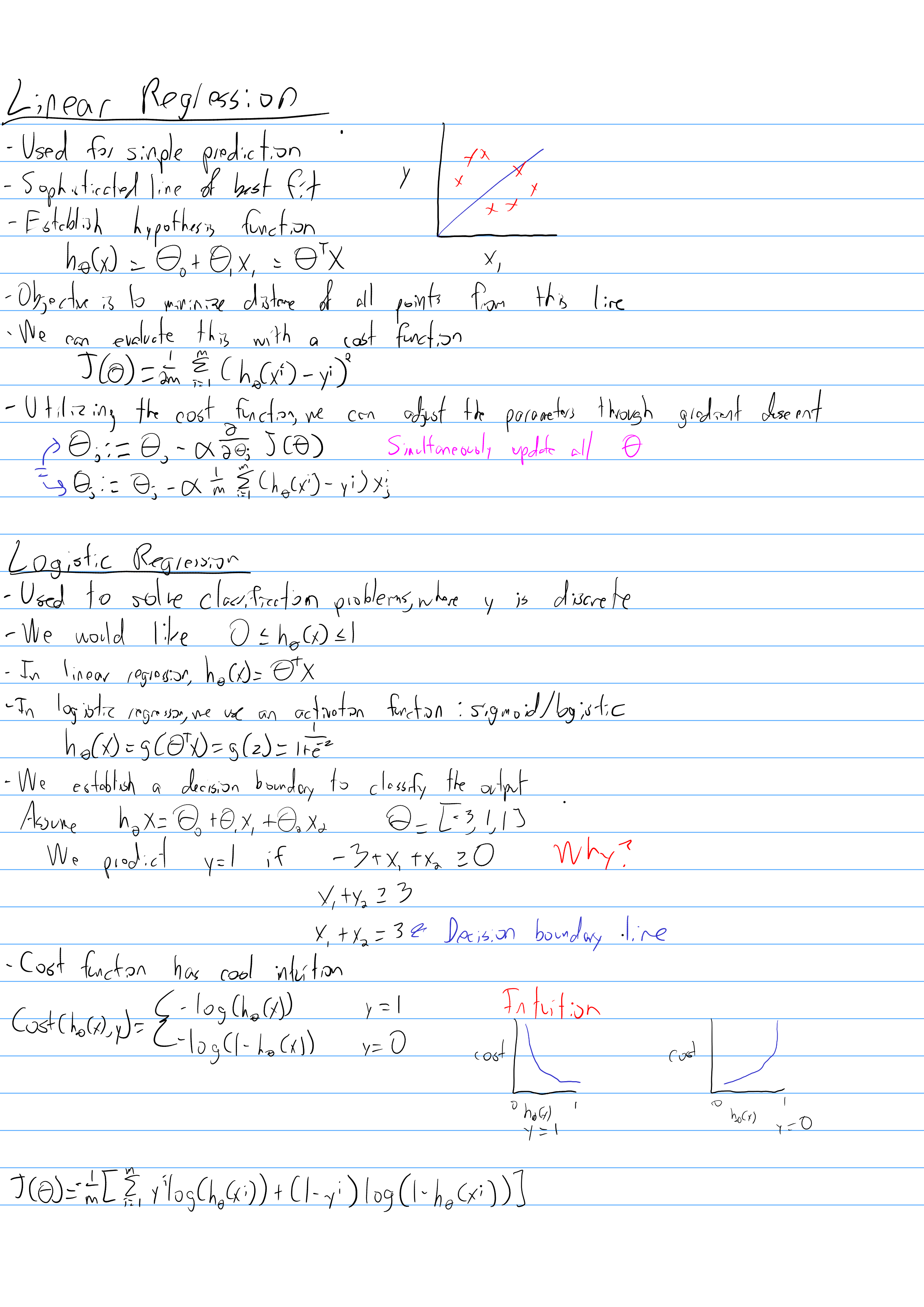 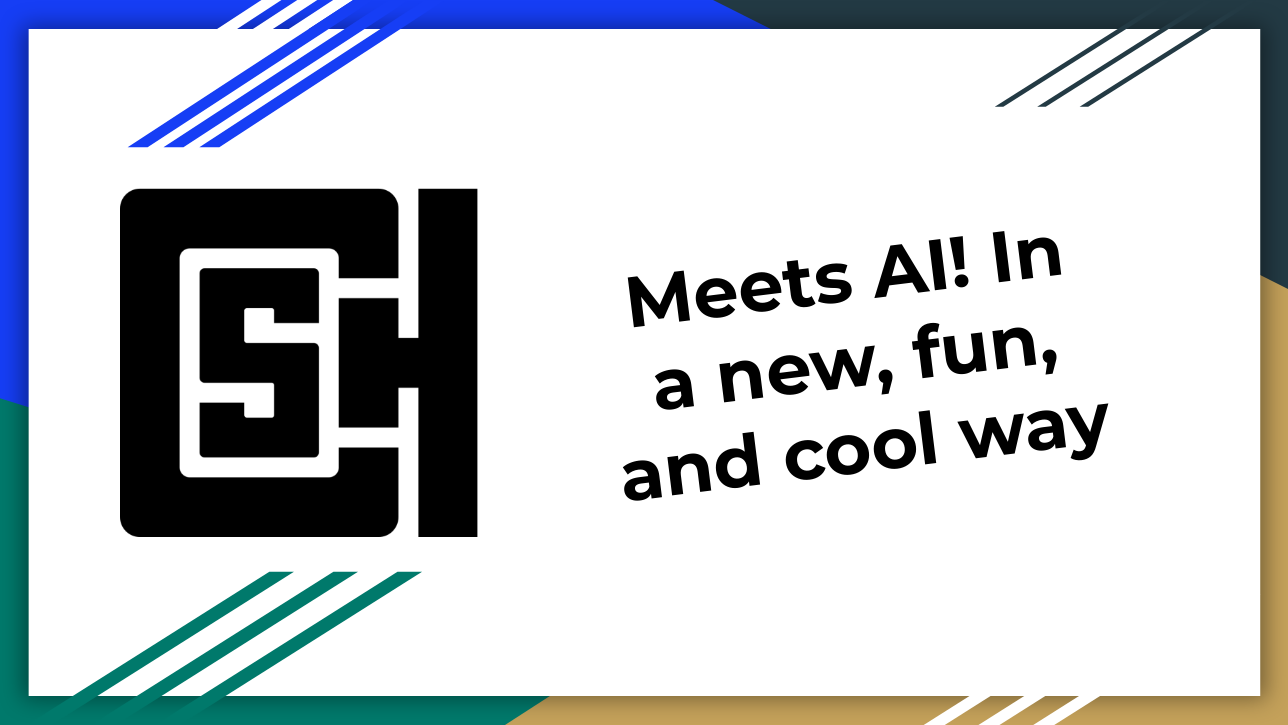 High level overview of the power of AI, presented in a light-hearted, comedic fashion. Given to Computer Science House. 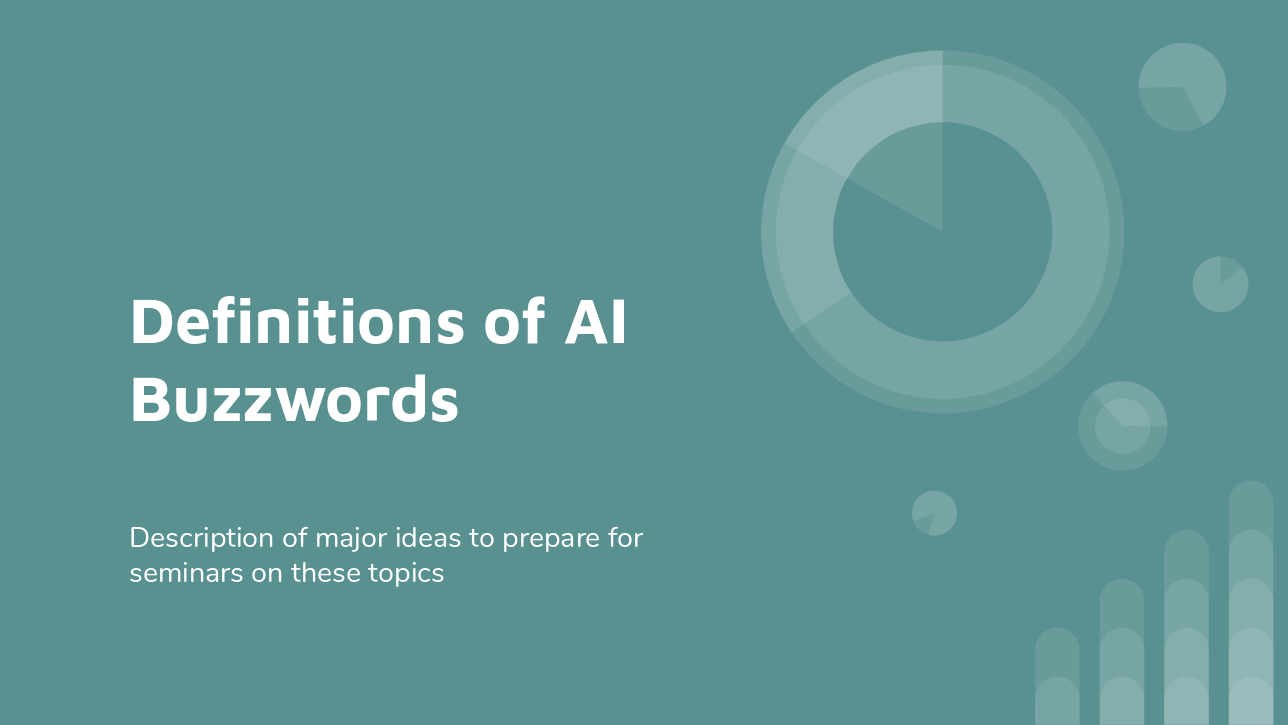 Very brief overview of AI buzzwords so that people can actually use them with some intuition. Given to Computer Science House. 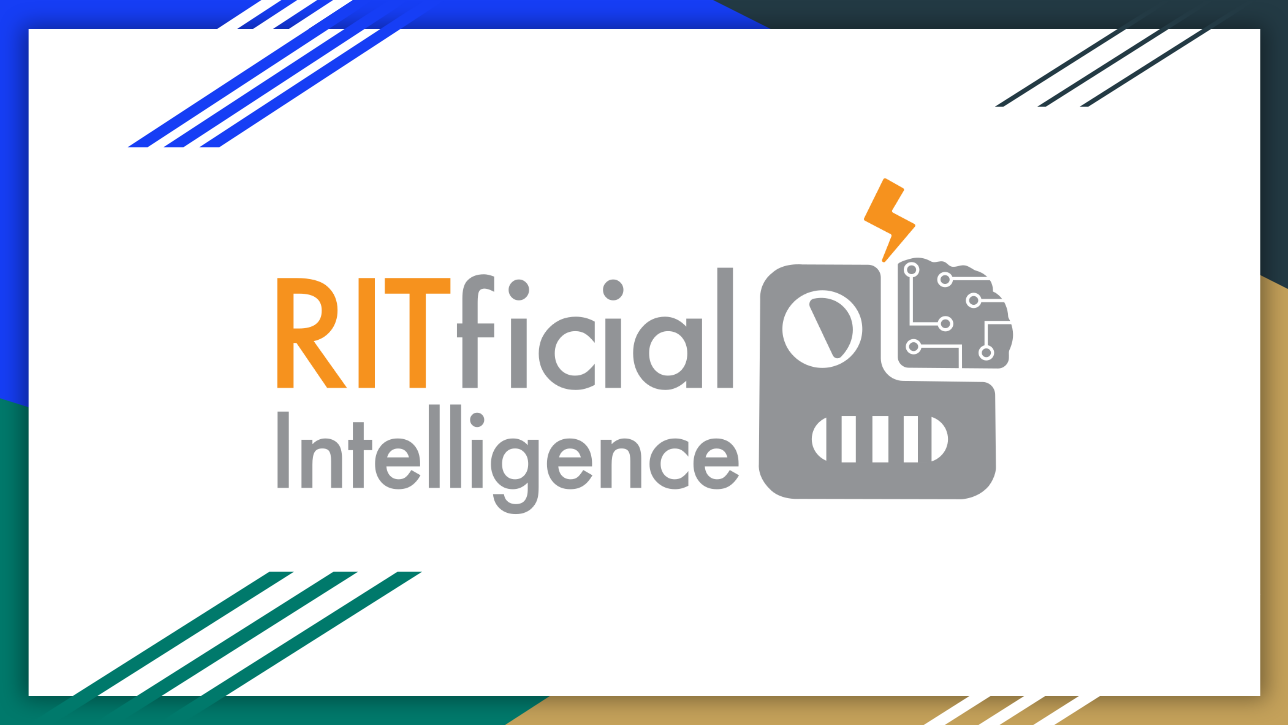 Introductory meeting to RIT's AI Club, discussing the power of AI using the classic horse example. Comedic and light-hearted presentation, aimed at generating interest and understanding about the club. 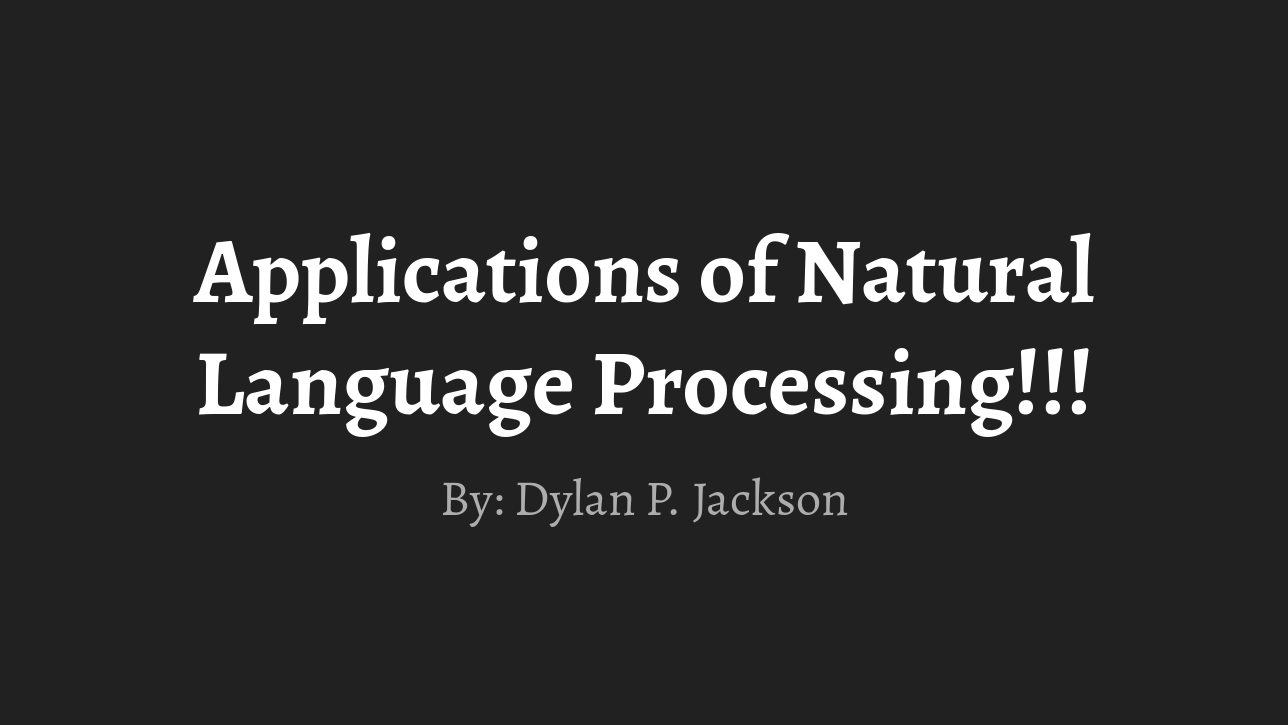 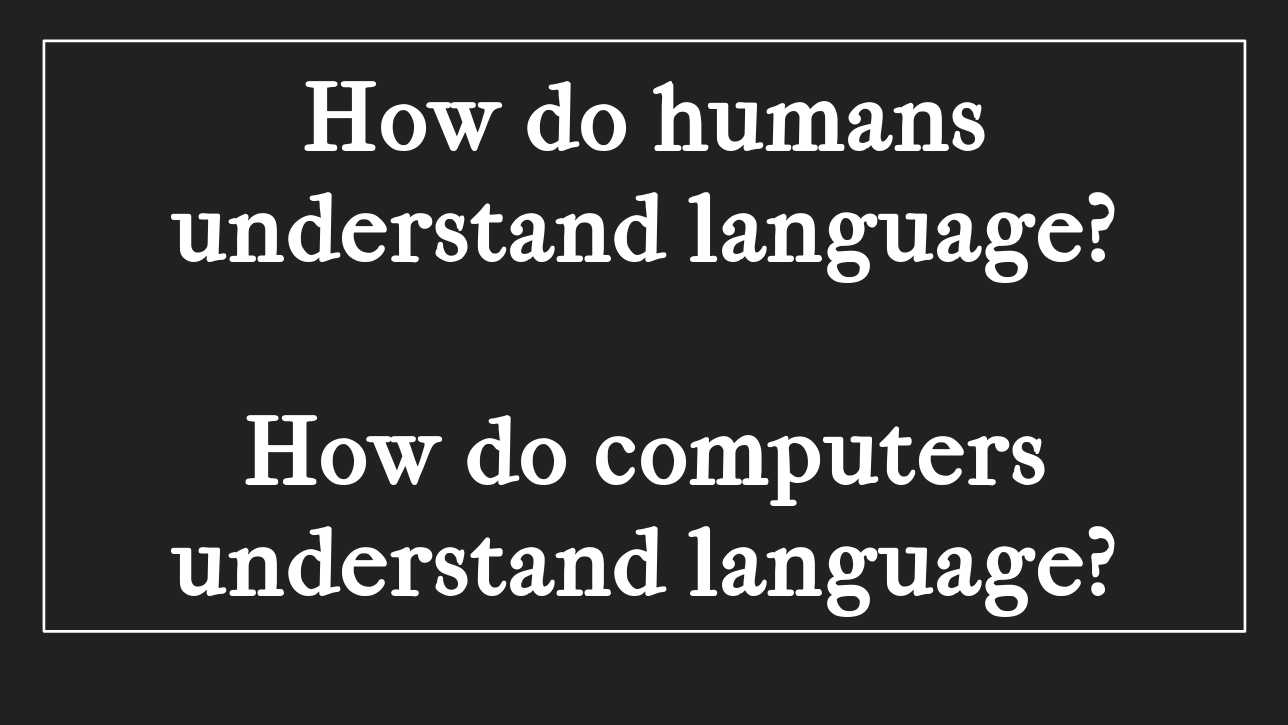 What is NLP, an introduction into semantic spaces and semantic relatedness, as well as how words are turned into vectors. Demo of NLTK abilities.